We are finishing week 7 and my plan is to have the older kids carve soaps this morning. I thought it would be "fun" to talk about the Inuit first, we have a book from the library on the Inuit and I found a few lapbook pieces, but I'm wondering if the Inuits/Eskimos/Arctic Circle, etc. are going to be talked about later on? I know Antarctica is covered later.

The book I have found from our library I highly recommend: "Inuits" by Judith Harper. It has wonderful pictures, little boxes with different animal facts - beluga, narwhale, etc. - sprinkled throughout and a glossary in back. I skimmed through it, but I haven't really sat down and read it. I did notice references to global warming in the back (Inuit Today) and yet I didn't find anything referencing to millions of years. A fun little book!
Andrea ~ Christ-Follower, Blessed Wife, Mama of 4
Top

Ooooh, one of our very favorite books in ECC was the Very Last First Time, which is about the Inuit. I remember reserving it while we were in Canada and then not getting it until we were in Russia, but finding that it fit very well there because we were learning about the nomad reindeer herders. So, I guess I don't think you're jumping to something that's covered later specifically, but you will touch on northern peoples again generally?

I do think the inuit pop up here and there in ECC Canada -- book basket, the soap carving page actually has a little info on there, the bit you found in Trip Around the World, etc.

4monkeyz wrote:Thanks Julie! Sometimes I have to remind myself to stay on topic, unless the kids want a little tangent, otherwise I get so excited I start to meander a bit.

I chickened out on soap carvings by myself, dh is home so we are going to tackle it as a "family" project (that way if anyone gets injured I have a back up plan.) We did talk a little bit about the Inuit, but not a whole lot, it is nice the overlapping of various topics throughout the year. Sigh. ECC is so much fun!! I'm loving how much everyone is enjoying our little trips. My sister gets back from London next week, she is bringing a little bit of Scotland with her (she's been studying for her Master's and PhD) -- we are adding it in somewhere along the line. Anyways. Thanks!!

Here's a cool video that goes along with Very Last First Time. The Inuit girl in the story had to do exactly what the man in this video is doing. The narrator says in the video that this is the only place on earth (Canada) where this phenomenon happens.... being *able* to go under the ice to the bottom of the sea like that because the sea rolls out.

Search on Youtube for:
Race against the tide, risking death under huge blocks of ice - Human Planet: Arctic - BBC One

4monkeyz wrote:Thanks for the Youtube links! We did watch another video from 1959 on the Inuit which was interesting. We finished our Canada portion of study and enjoyed a yummy Canadian dinner. Which is probably not 100 percent "accurate," but we had pancakes w/butter maple syrup, blueberry crisp, bacon, hot cocoa & moose track ice cream. And I did brave the soap carvings with out my dh - my son did scratch himself with a butter knife but no missing digits!! Heehee. They turned out cute. My dd made a sitting cat and my ds made a mantee after his walrus lost a tusk. Such fun!

Now we are in Brazil - which I must say the Amazon video by Vision Forum has been a great addition to this study. Anyways....off to finish coffee! Having a great year.

Donna, with two MFW graduates and the "baby" in 11th grade!

We didn't have as much of a "grand entrance" into Canada as we'd had for Mexico, but it was still fun. We "flew" straight from Mexico into Canada. On the plane ride, Gail received a box of Maple Leaf Crème cookies, one of her favorites. That was what made the "trip" memorable for her!

Thankfully, our library had many books about Canada for book basket. Gail really enjoyed learning about the lives of the Inuit people. We delved fairly deeply into this, including an exciting family read-aloud called Ice Drift in which two young Inuit boys are stranded on an ice floe for months. We also watched a documentary film called "Great North" which showed some of the things we had been learning about... making an igloo, hunting seals at breathing holes, and more. As a child, I was fascinated by anything "northern" and it was fun to revisit this interest as an adult!

Gail listened to the Focus on the Family audio drama of Anne of Green Gables... and of course we watched the movie (a long-time favorite here). We had fun looking at some real Canadian coins and making rubbings of them. We agreed that Canada has beautiful coinage!

For our Canadian feast, I made waffles and we used real maple syrup (not something we normally use at our home due to expense). Although the syrup was nice, it was not quite what we expected. I also made and served poutine, a popular (or so I hear) Canadian dish made from French fries covered in gravy and cheese curds. My husband and I liked this so much that we've made it a couple of times since then! (I will eat anything involving GRAVY and CHEESE!) Gail did not care for it, however.

I neglected to take many photos during Canada, but am glad that at least I have some pictures of Gail's soap carvings. She made a walrus (with toothpick tusks) and a Snowy Owl (to which she added a touch of color), while I also carved a Snowy Owl and my husband did a Sage Grouse. Some of the details of Gail's carvings are lost in the camera glare... 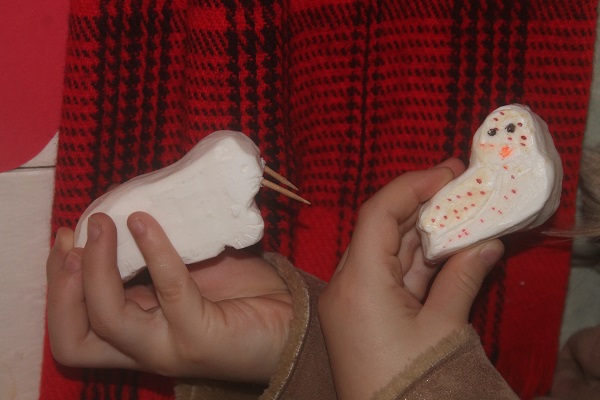 For every country, we add items to a bulletin board. These include the John 3:16 page, a map or something similar, drawings or artwork, photos, embellishments, and some fabric or clothing representative of the country. We take everything off right before we begin a new one, and add those things that are appropriate into our ECC notebook. So this board has the Canada John 3:16 page, Gail's drawing of a polar bear, a map of Canada's provinces and territories (obscured behind Gail), an Inuit scene we made from paper, some maple leaf embellishments, and a red scarf. It gives us a focal point for each country. 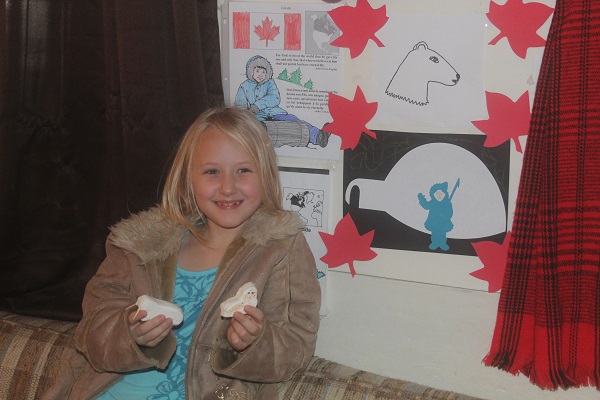 To finish up our study, I used Windows Movie Maker to create a slideshow highlighting Canada, using a beautiful rendition of "O Canada" by a women's group called Quartette and an Inuit song I downloaded. It was beautiful and captured the essence of what we had learned. I think that later in the year, these videos will be a nice way to review and revisit the countries we've studied.


hsm wrote:Can I be in your class?