For Thanksgiving Week, the TM suggested taking a break from the usual math and English, so I went hunting on the Internet for some Thanksgiving-themed math worksheets. I didn't know if it was okay or not to post links to the sites, so just type "Thanksgiving math" into your browser, and there are a few good sites for Thanksgiving math pages. One of them is a kidzone site, and the other is math-drills dot com.
Jen
happily married to Vince (22 yrs)
blessed by MFW since 2006
have used every year K-1850MOD
2021-2022: CTG with 12yo boy
Top

4littlehearts wrote:I have a very large pumpkin. It has a 38 in. circumference. I put it in the tub and it sunk down but I do not know if more water was needed to make it float. Is it supposed to float? I am sorry this is such a stupid question. Thanks! Jan

Our small pumpkin floated with just a little of the top peeking above the water. Maybe the water has to be deep enough to compensate for the entire pumpkin? We put it in a deep kitchen sink.
Tabatha

That is what my dh said as well. He thought that I filled up the tub all of the way to accomodate a bigger pumpkin or used a small pumpkin, that it should float. Maybe we will try again tomorrow or find a smaller pumpkin to use with it instead. Thanks! Jan
Top

Pumpkins float, but you'll need deeper water to demonstrate this with a large pumpkin because much of the pumpkin will be below the water's surface.
Kris
2007/08 ECC with 1st & 4th grade dc
Top

Well, I gave up on getting the pumpkin to float because I would've had to fill the bathtub to the rim because the pumpkin was soooo big. I tried to see if any of my neighbors had a small pumpkin I could borrow but they had thrown them out already. We did however cut the pumpkin open and my children were very surprised at the amount of seeds inside. We did not count them but knew that there were over a hundred. Thanks!
Top

Just an FYI...
All the pumpkin activities worked well with a small pumpkin (16" diameter).
Not as much meat for cooking, but it did float well in the tub and have over 500 seeds in it for counting and cooking!

Our pumpkin was just 16" in diameter.
We used the bathtub to test its buoyancy.
At first it didn't look like it was floating, but as soon as the water was deep enough the children could see it start to bob around.
They each took a turn pushing it under and watching it pop back up!

We were amazed how many pumpkin seeds where inside that little pumpkin. We had 512 seeds!! That was the biggest surprise of all our predictions.

--LA in Baltimore--
Only by His grace,
LA in Baltimore
Currently enjoying Rome to the Reformation
Graduated oldest May 2010, Three more to go!
Top

What to do after cooking pumpkin (Thanksgiving)

I wasn't sure what to do with our pumpkin after cooking it so I did an online search and found the following:

After cooking the pumpkin, drain, cool and peel. If desired, mash with butter, brown sugar and cinnamon. Or, if using for pie filling, puree in a blender or food processor with knife blade attached. Do not add other ingredients. Place in a paper towel-lined sieve set over a bowl and let drain to remove excess liquid; puree should have the same thickness as solid-pack canned pumpkin.

My dh, who likes to bake, (don't tell anyone) made pumpkin pie out of the puree we made. He used a recipe out of my Betty Crocker cookbook. He also makes his own crust so it was completely from scratch. He was very proud that it was completely from scratch. The pie was really good. The only difference was the next day what was left of the pie didn't stay the bright orange color. We had refrigerated it and it was still yummy. I think canned pumpkin probably has coloring added so it will keep it's color.

Re: Adventures in My Father's World - Thanksgiving Week

If you are in the Northern Illinois area....we just took a field trip to the Lowden State Park where you'll find a 50 foot Native American statue named Black Hawk overlooking the Rock River.

What an experience. There were trails to hike and steps that travelled down the 250 foot cliff by the river (just be prepared to head back up!) They have historic information posted around as well as a biography about Chief Black Hawk (...who knew he wasn't actually a Chief?) My kids were fasinated to look at the trails and imagine Indian tribes camping, fishing and hunting in that very area!

Thanks to Crystal for suggesting that those who bought Adventures during the discount to look into the Thanksgiving activities. I love my new Adventures package, by the way, and can hardly wait! Box day was so much fun as all three of us explored that fun box!

We did the pumpkin activities suggested in the manual. It was a fun afternoon of doing school outside in the pleasant weather. My favorite was the question... "will the pumpkin float?"

We had a medium sized pumpkin. Gail thought that it may not float. When she saw that it did, she said, "Then so will the little ones!" and she put assorted small gourds and pumpkins in the washtub. So I pointed to our large pumpkin... would it float? "Surely not," Gail said, "because it is so heavy." But as I lowered it into the water, she suddenly cried out, "Wait! I think it will... it's the air inside that must make it float!" Total lightbulb moment for her. Size doesn't matter, but bouyancy does. Big boats and little boats float, little ducks and big ducks float. Big pumpkins and little pumpkins float. Nice to see that "gotcha" moment.

Thanks MFW for the great discount that encouraged me to get Adventures now, and to Crystal for the suggestion to do the activities. 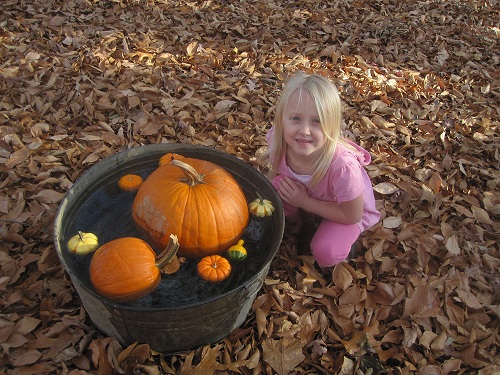 Too sweet!! We did the hand turkey and the hand-and-foot turkey which dd just Loved! It was proudly displayed at our Thanksgiving gathering.

In Adventures, one of the activities is to trace your child's handprint to make a turkey...since my daughter has done this countless times, I was actually going to skip it &) and try to find something else to do instead. I found a neat idea--still using the handprint. Trace the hand onto a thin cardboard (you will need to cut it out). Then use this "stencil" on your piecrust...cut the "hand" out of pie dough and place on top of your pumpkin pie. It looked really cute.

Happy Thanksgiving to all!
~Brenda~

Re: Thanksgiving "turkey handprint" another idea

Okay, here's another idea that my dd's Sunday School class did yesterday. They made the handprint and attached it to the side of a clear, plastic drinking cup. They put candy inside the cup, which was the best part for the kids, LOL, but the best part for Mom was the way they included their memory verses for the week.

They attached the turkey's face (wearing a pilgrim hat) to the front side of the cup, and on the hat it says, "Titus 3:1-2: Remind them..."

Then they put a phrase from those two verses on each finger of the "feathers". So the farthest left finger says, "to be subject to rulers and authorities," the second finger says, "to obey," and so forth.

We have company this week, so I'll leave this set out for the company to see. Pick whatever verse(s) you like -- John 3:16 or whatever, maybe something you're working on in MFW this week -- and have it out someplace visible for company to view.

You could even make this as a gift (or gifts) and take it to the neighbors as a way to witness!

Donna, with two MFW graduates and the "baby" in 11th grade!