Re: ADV Week 12, including Bird Study

I found a great book that fits in well with both NJ and PA. It's called "The First Air Voyage in the United States, the Story of Jean-Pierre Blanchard". He grew up in France, then came to America in 1793 and flew from Philadelphia to Woodbury, NJ in his hot air balloon. George Washington is mentioned, as his letter was the first air-mail delivery! Lots of geography references, and science experiments. The book has some french dialogue (with translation) so that was interesting too. My 7-yr-old enjoyed it (probably didn't hurt that there was a dog along too

Fun stuff for Adventures bird study or just because!

I just thought I'd share something which might be of interest to those who are doing or have finished the bird study in Adventures. Or just for fun because the board is quiet!

We use "bird" as an action verb, as in "Did you see anything when you were out birding?" or "Do you want to bird today?" or even "We birded the wildlife refuge for four hours."

Gail is involved in this hobby as well... her "life list" would rival that of many adults (I think she is at 180 species). She had always heard stories of me as a child with the hummingbirds in my yard, and how they would land on my finger. She had also seen her Daddy standing patiently outside by the feeders until wild birds would land on his hand to eat (he got several species to do this). She felt a little left out... at least until this April when she got to experience this firsthand.

We came home one day (from a bird-related field trip, ironically enough) to find our feeders swarming with Ruby-throated Hummingbirds. Our neighbors are the ones who usually have large numbers, but this year we were blessed with lots of hummingbirds. Lots! On this first day of the "swarming," I encouraged Gail to put on a red jacket and stand by this one little feeder. We had 8 feeders up, most of them larger, but some of the birds chose to come to her feeder. 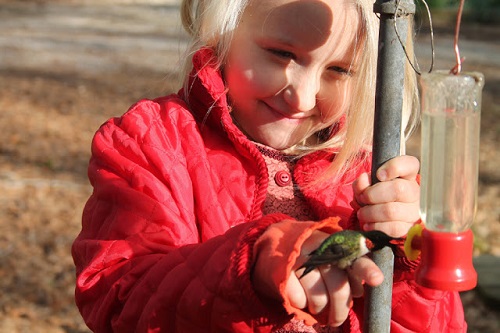 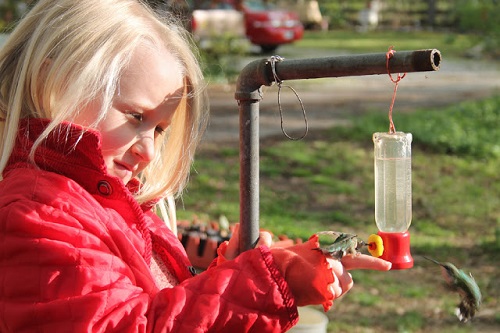 She stood out there for about an hour, just enjoying the thrill of it all! There is a short video of this and some artwork by Gail that a friend from the Tennessee birding list put on her blog. My mother is the voice you hear making colorful Southern-accented comments in the background (like, "Lordamercy, I ain't never seen so many hummin'birds!"), and she is the one whose camera makes barking dog sounds.

The rest of the background noises are just how our yard sounds... singing birds and pet ducks. See video here:

I just thought I'd share something that some people may not know can happen. It might inspire someone to put up hummingbird feeders next spring! I thought that other children might like to see "one of their own" doing something unusual.

Thank you so much for sharing that, Shawna! That is amazing! I loved Gail's artwork and the video on the other blog! Gail was so patient, and she was so still after the hummingbird landed on her finger! I would have started jumping up and down with excitement and scared all of the hummingbirds away!

I had no idea you could stand and wait for them to land on your finger to perch. Awesome! Thanks for sharing!

That is so amazing and beautiful!! We are a "bird" family too! I'm going to share this with my husband and our children- we'll have to see if we can get any hummingbirds to perch on us! Our feeders are up high- so I'm going to set some up lower now. Thanks for sharing!

Oh my, I definitely am one who didn't know this could be done! I watched my mother-in-law's hummingbird feeders attract birds over the years and don't know of anyone who thought this could be done! She looks like a little Francis of Assisi, standing there so carefully. Thanks so much for sharing!

tiffanys wrote: I cannot figure out one element to the state sheets. What is the purpose of the words in the banner under the state name & nickname? For example, Delaware's says, "Liberty and Independence." Is it a state motto? Just virtues found in the state's history?

I'm pretty sure these are each state's motto, yes. I just searched Delaware's motto, and "Liberty and Independence" is what came up.

Thank you! Why I didn't think to google it myself, I don't know. My brain's taking a break today. We're having a great time with Adventures - I'm definitely hooked on MFW now!
Tiffany
Having a great year with Adventures with my two older boys - 3rd & 1st grades
With the world's chattiest 4 year old boy & his 2 year old sister tagging along
Top

I was not crazy about the Liberty Bell cup craft, so I found this one, which my kids enjoyed! They turned out wonderful!
http://www.deepspacesparkle.com/2012/02 ... t-project/
Beth in GA
Mom to a boy and a girl
Using MFW since 2012
Top

Get a glimpse of the Liberty Bell - and of the reproduction at the Museum of the Bible!
The Bible - Leviticus 25:10 - is on both:
https://www.museumofthebible.org/book/minutes/644
Top
Post Reply
35 posts