Melany wrote:This may be a silly question. But we are getting ready to start Adventures tomorrow (I'm so excited!!) and I was putting together the notebooks.

There is the front cover sheet for the United States notebook, but what do we use for the other notebook?

Is the Student Sheets sheet the one that goes in the front of it?

Did you do a 3rd separate notebook for the Nature notebook or did you just combine it with the other one?

I didn't use anything for the other one.

I can just tell you what we've done to give you some ideas. For Adventures (and each of the other years), we keep two notebooks. I use three-ring binders with a clear window on the front that you can put a cover page in and page protectors. One is a history notebook (1" binder) and the other is for all of the other subjects (2 1/2 " or 3" binder). We use the cover page that comes with the student sheets for the history notebook, and my girls make their own cover page for the other notebook. They draw a picture and write the current school year and grade on the sheet. Within the other subjects notebook, we use index dividers to make sections for science, math, language arts, etc. At the end of the school year, I take all of the sheets out of the page protectors and bind them together with my comb binder to make them into a book. Then, we reuse the binders and page protectors for the next year. That's just what we do for notebooks and organization, but there are lots of ways to do it.
Jen
happily married to Vince (19 yrs)
blessed by MFW since 2006
have used every year K-1850MOD
2018-2019: Adventures with 9yo boy
Top

Adventures: Bible & History, together or separate??

Hi all,
I wanted to go ahead and set up the History Notebook with the pages already in it. But I see that the Bible & History pages are mixed together. Are they taught together much like 1st grade or are they more separate subjects that can be done completely separately? From a quick look over the lesson plans I thought they looked separate.

Adventures: Bible & History, together or separate??

Smoakhouse wrote:Hi all,
I wanted to go ahead and set up the History Notebook with the pages already in it. But I see that the Bible & History pages are mixed together. Are they taught together much like 1st grade or are they more separate subjects that can be done completely separately? From a quick look over the lesson plans I thought they looked separate.
Thanks,

They look separate to me. I've found that the student sheets are put together by week/unit. So, you might have a Bible sheet after a history sheet, but that is because they are scheduled the same day or week. If you want all the history sheets already in the notebook, which I may do also, just pull them out and put them in leaving the Bible ones in the pack for when you need them.
Heather
Wife to an amazing man
Mom to 6, ages 10, 7, 7, 5, 5, 3
Zack, 10 CtG
Samantha & Blake, twins, 7, CtG
Matthew & Joshua, twins, 5, MFW K
Nicholas, 3 derailing and tagging along
Top

Re: Adventures: Bible & History, together or separate??

In Adventures, yes, Bible and History are taught separate. Bible and Science are actually the two subjects that feed off each other. The student sheets are "mixed" together because they are organized by when they are used (week/unit) NOT by their subject.
Danielle, Mommy to DD#1- 3rd/ECC, DS#1 -2nd/ECC, DD#2- K, DS#2- pre-K, and DD#3- learning to toddle
Top

Re: Adventures: Bible & History, together or separate??

Great! That's perfect. I'm setting up the History notebook and a Bible verse notebook too.

We're doing Adventures here and have been creating our own notebooking pages. The ones included with the student sheets are nice, but my girl likes to write smaller and include more pictures on her pages. I thought I'd share some of what we've been doing.

We use colored cardstock as a background, then she uses a combination of pictures on her pages. Some are printed off the internet and then colored and cut out, some are drawn by Gail, and some are cut from old history books. We have one old book in particular which I don't mind cutting up. I got it at the library bookstore for 25 cents, and it has a very skewed and secular view of American history. I don't like the content, yet the pictures are nice. What was meant for evil, we have used for good!

In the following picture, you can see how we found a famous painting of the pilgrims (the picture of them walking in the woods) in that book and used it, along with a different picture cut from another book and Gail's drawing of Squanto. Lots of the pages are a mix similar to this, pretty straightforward, but with nice pictures because we get them from that book. You will have to use the scroll bar to see it all. 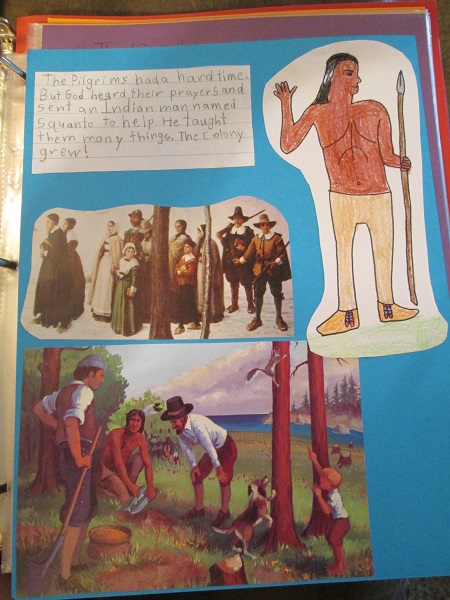 Gail arranges the pictures however she likes and then adds embellishments like stickers. But her favorite way to embellish and add a little life to the pages is to use "word bubble" stickers with quotes inside. You'll have to scroll down the page to see it all, I have trouble making photos fit. 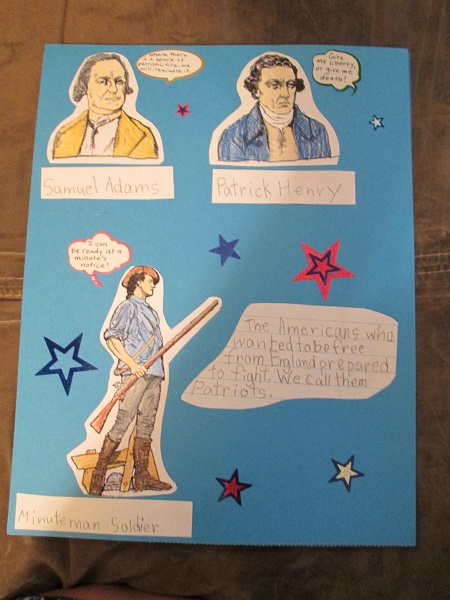 In this page which we did leading up to the Revolutionary War, she wanted to put some quotes by famous patriots which she enjoyed from our reading. Patrick Henry is saying "Give me liberty or give me death." (of course) Samuel Adams is saying "Where there is a spark of patriot fire, we will rekindle it." And she liked the idea of "minutemen" and so colored a minuteman soldier and wrote him saying "I can be ready at a minute's notice!" This made it a little more interesting for the reader and helped explain the idea of patriots.

We had a little fun with this recent page with word bubble quotes. Again, use the scroll bar. 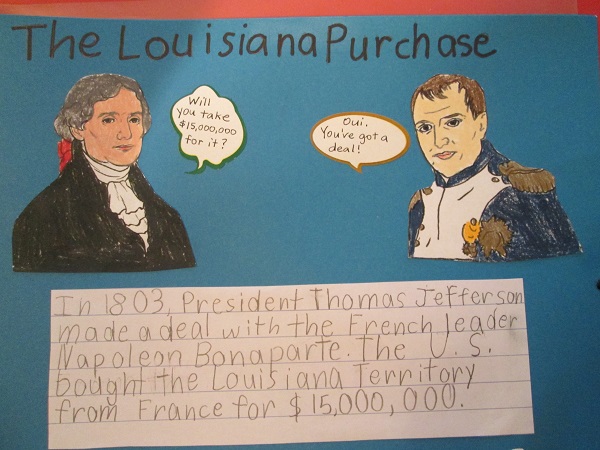 If you have trouble seeing it, that is President Jefferson offering to buy the Louisiana Territory from Napoleon. He is saying, "Will you take $15,000,000 for it?" to which Napoleon answers (with a slight inclination of his head), "Oui. You've got a deal." Heh heh. Not sure how accurate this face to face meeting is, but it was fun to portray. Below it there was a map of the purchase, but I cropped it out in the photo. I don't know where we got those word bubble stickers, but they have made notebooking fun!

We also enjoy adding three dimensional objects and items. For example, on one of Benjamin Franklin's pages (he got TWO pages), there is a pocket to hold the miniature Poor Richard's Almanac. There is a pocket by the Declaration of Independence page to hold a small copy of the Declaration that people could pull out and read. By the Eli Whitney page we have a wee pocket with real cotton bolls so you can take them out and feel the seeds, and cotton seeds to make a frame around a picture of people using the gin. In that one, I put photos of Gail struggling to get the seeds out and put a "thought bubble" sticker that said, "This is hard." That sort of thing. Not as elaborate as a lapbook, but still a little bit dynamic and varied.

What a beautiful notebook! How fun to see some other ways for documenting a student's learning. It will be a priceless treasure for you in years to come! Thanks for sharing!
Jen
happily married to Vince (19 yrs)
blessed by MFW since 2006
have used every year K-1850MOD
2018-2019: Adventures with 9yo boy
Top
Post Reply
8 posts • Page 1 of 1

Return to “Adventures in U.S. History”